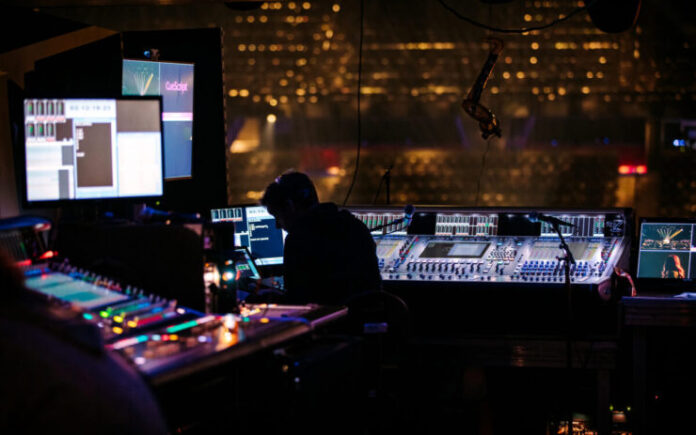 Yesterday afternoon, the first full rehearsal of the second Eurovision 2022 semifinal was beset with technical problems. After being super frustrated with the audio issues, I called the man who knows stuff: my Dad, Murray. So here’s a little explanation of why holding a massive song contest in Europe is anything but fabulous fun for a sound engineer.

Little back story: my Dad has been working in audio since the mid 70s and had gone through all the changes from analogue to digital formats and not only still works in big live TV stuff, he also hires out gear to other people to get TV and other large events done.

In a perfect world

The biggest issue in Europe is the lack of available frequencies to use. A huge area and lots of things going on. So what does this mean for Eurovision? In a perfect world, each mic and each ear monitor uses its own frequency. But sometimes they need to double up. So for example, you had Albania opening the first semifinal. They would have done their sound check backstage, ready theoretically for the stage as soon as the postcard ends. They have six people on stage, which means six channels for ear monitors, one channel for Ronela’s mic. So that’s 7. Maths!

Since we now have most backing vocals on a track, we don’t have to worry about any extra channels for that. While Albania is on stage, other acts are doing sound checks. Each of those artists would have a channel each for their ear monitors and a channel each for the singer/s. Now, you CAN in theory share a channel, but you have to switch it while it’s free. What we may have going on, is the channels that are being doubled up, are stuffing up acts later in the running order.

Throw in the covid protocols of each artist having their own mic, and you’re set for stress on your audio engineering team to make sure the right channel is being used for the right act. Yikes.

Add in the Eurovision press

A lot of this comes down to the skills of the audio team. If they are not on top of it, you’re going to have artists getting no music in their ears, and no mics picking up the singing.

BUT THEN. We have press on the ground. While they are told to not use radio mics, some still do, adding pressure on an already overloaded and congested load of frequencies. Anyone using a mic for an interview can stuff up the what is going on in the arena. In yesterday’s dress rehearsal (before the jury show), we got to the Romanian song before anything started to get hairy. The whole back end (songs 13-18) had issues with audio. Maybe, just maybe, the sharing of frequencies got too much.

What does that mean for the Eurovision Grand Final? Rai audio engineers are going to have to do ALL the maths to make sure IF they do have to double up on frequencies, they have to time it just right to make it through all 25 acts … not to mention the interval acts, and the hosts.

I hope this makes so sense for anyone confused about what happened yesterday. I was too, and it’s why I had a lengthy chat with a guy who knows something about this stuff. If any TV people see this article  and want to correct me, please do. The more information and understanding the better.