Jeangu Macrooy representing the host nation has the tough job of turning in something respectable, but (if possible) trying not to actually win – because winning takes money. With ‘Birth of a new age’, I suspect he’s done just that. Rather than travel down the more certain road of a soulful, commercial song, he’s turned in something heart felt.

In minor change news, he’s dropped that distracting black and red body harness, otherwise the outfit is the same. There are four people on stage. A dancer in red largely uses the far stage, running in close for the first chorus where the camera holds shot to remarkable effect.

The backdrop stays dark with shafts of light breaking through until the last part of the song where it explodes in colour with the slogan of the song – Yu no man broko mi – shown large and translated – hopefully to offset those who seem to think it hugely amusing (as opposed to offensive) to joke about broccoli.

Jeangu has a way of genuinely engaging the viewer in his confident performance, singing into the camera throughout. His face conveying emotion.

With all four on the satellite stage for the final chorus, this hangs together so well. 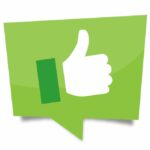 This is a slick and well put together performance that certainly won’t shame the host nation. Remember ‘Calm after the storm’ was 125/1 before rehearsals started. I know. It funded new patio furniture in the Fanning household.