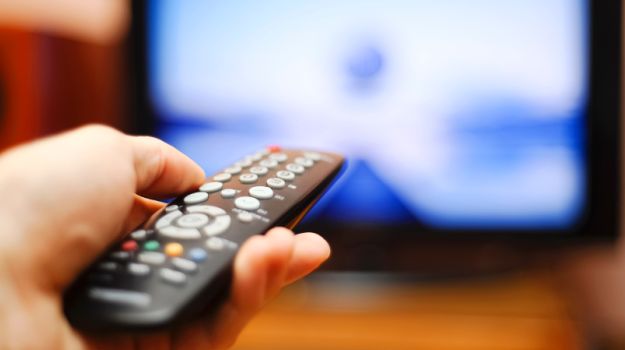 Update: We have now published a summary of 2019 figures.

As the dust settles on another Eurovision Song Contest, we look back at the viewing figures. Last year, numbers were down after Russia withdrew and didn’t broadcast the event, but with 43 competing countries, it was always going to be a big occasion. You’ll find numbers for the semi-finals further down the page.

The number represents a similar audience share to last year, but down on 2016. Factors that may have impacted include the ban on Chinese viewers and Russia failing to make the final. The official YouTube stream also picked up half a million views, though was offline for a week or so after the contest while edits were made to splice in SuRie’s non-invaded performance, missing out on the key aftermath interest. By contrast, the first semi-final (3.3 million) and second (2.1 million) proved more popular.

You’d expect strong interest in Cyprus, and initial figures do confirm this. A modest 50% of viewers tuned it at the start, but by the time the votes rolled in, 93.4% of viewers were glued to their screens. With an average of 245,740 (77%) tuning in, RIK confirmed it to be the highest number of viewers ever for Eurovision. Strong support carried over to Greece where – thanks to 1.85 million viewers – ERT enjoyed a 47.9% market share, rising to 66% during the vote count.

Oddly enough, the numbers in Israel were down on those for Tuesday’s semi-final, but 1.06 million (35% share) still represents the highest rating for a Eurovision final since 2005 in a country of 9 million people. When Netta performed, the numbers jumped to 1.16 million.

In third-placed Austria, a 59% share of the market saw over a million watching as the nail-biting vote kicked off.

Reaching the final was great news for the Irish, and even better for national broadcaster RTE. The final averaged 690,000 viewers – a 52% share. As the voting ended almost a million had tuned in.

The Dutch showed less interest however – despite Waylon being a fairly known name. Generally negative local press coverage saw support drop away and just over three million watched – down almost one million on 2017. Estonia reported a decent turnout. The combined total (Etv and Russian Etv+) was 250,000, rising by 50,000 as ‘La forza’ aired. It represented a market share of 78.7%.

Saara Aalto earned the support of Finnish viewers. An average of 976,000 followed the show, with it reaching 2.1 million overall. A massive improvement on last year when just 525,000 tuned in. In Norway, 1.37 million watched – a healthy 84% market share – up a shade on 2017. In Sweden though, SVT reported the lowest viewing figures for a Eurovision final since 2010, with 2.6 million skipping good weather to watch. The Danes were keen to follow Rasmussen, 1.13 million were watching on Saturday evening.

There was better news in Serbia, where after disappointing numbers in recent years, RTS was happy to claim a 30.3% share with 2.3 million viewers. Lithuanian LRT reported an average of 560,000 – with a peak of 1.3 million – almost 70% of all viewers.

In Australia, Sunday was dominated by two screenings of the final. SBS recorded 266,000 up early for the live show. The evening repeat reached 256,000. It’s a dip from 304,000 last year, but SBS On Demand numbers were up a stunning 454%, meaning the show reached 2.9 million Australians.

It wasn’t such a great story in Hungary where interest looks to be waning. Just 403,559 viewers watched AWS in the final – almost half of the numbers recorded last year. Swiss broadcaster SRF also saw a disappointing result with just 234,000 viewers (23.1% share) – their lowest number since 2012.

They may have come last on the scoreboard, but host nation Portugal took the show to their hearts. An average of 1.55 million viewers followed the show – representing a 36.4% share.

Over in ‘Big Five’ land there was solid support. It was a good night for French broadcaster TRF1, with the most-watched final since 2009. 5.2 million viewers (an audience share of 28.5%), put it ahead of ‘The Voice’. Another dominant talent show failed to beat Eurovision in The UK. An average of 6.9 million viewers watched – with a peak of 8.1 million viewers during the voting – the best results since 2014, and for the first time trumping ‘Britain’s Got Talent’. 6.4 million Spanish viewers rode the Operacion Triunfo wave to make  it the most watched Eurovision since 2008. An average of 3.4 million Italians watched, down ever so slightly on the gorilla-charged numbers of last year. Rounding off the Big Five, it was a huge night in Germany with 7.7 million watching.

Things were hit and miss in countries not taking part in the final. In Romania, the number was down massively on last year with just 158,000 watching. Belgian broadcaster VRT reported over 685,000 viewers, and despite that making it the most watched show of the night, it was around half the number who followed Blanche in 2017. Polish TVP had a poor night with 1.4 million – down almost half from 2.7 million in 2017. Iceland may have struggled this year, but an incredible 95/3% of viewers watched the final. 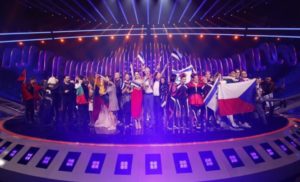 We’ll start with the host nation, of course, and Portuguese broadcaster RTP reports almost one million watching the first semi-final from Lisbon. Their highest ever numbers for a Eurovision semi-final.

Israel’s fledgling public broadcaster Kan 11 enjoyed an average share of 23.8% with a peak of 40.3% – equal to around 1.2 million viewers – when Netta was on stage. Their digital platforms recorded an extra 620,000 views.

The Czech Republic enjoyed a rare place in the grand final, but viewing numbers were down 30,000 on last year. An average of 116,000 watched.

As for those not taking part, just over a million Dutch viewers watched. In Australia, very few set their alarm clocks, and just 271,000 saw it live – the lowest figure since 2009. 821,000 Swedes watched, giving SVT a (relatively low) 34.8% market share. Danish interest was also on the low side with 409,000 viewers. 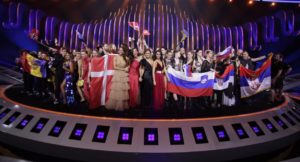 After breaking records on Tuesday, numbers were down very slightly in Portugal for the second semi-final, but still more than  respectable, with 970,000 watching.

Waylon’s PR machine had been hard at work fighting bad press in The Netherlands, and the second semi-final topped the ratings with 2.64 million viewers. A 71% market share (around 1 million people watching) must have pleased of Norwegian NRK. Swedish SVT were also smiling as they reported a much healthier 79.3% market share with 2.85 million counted. In Austria, 366,000 watched – representing 16% of the market. Danish broadcaster DR reported a healthy 735,000 viewers.

Down under in Australia, the numbers were even lower than Tuesday with 53,000 up early for the live show. A more impressive 319,000 watched the evening re-run. Czech TV, on the other hand, continued to report dismal numbers. This time just 80,000 tuned in.

With no Greek song in the running, interest naturally tumbled for ERT who reported a record low 7.9% market share. It wasn’t a great night for the show in Finland either. Without Ms Aalto, viewer numbers were down to 357,000. VRT reported 587,000 in its part of Belgium. In Switzerland, there was low interest, with just 89,000 tuning in. In Cyprus, numbers were down to 65,230 – still a healthy 25% share.