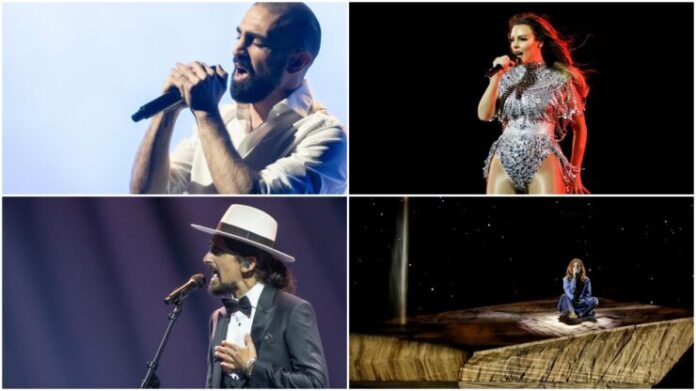 Goedemorgen Oneuropeans, and welcome to Day 7. A week already! It’s the final second rehearsals for the semi-finalists, and a short day today after yesterday’s marathon. Just eight countries to see. It’s essentially a repeat of Tuesday.

I also need to juggle a trip to get my second vaccination today – yay! Double pricked at last! I might have to miss something, unless I can push my appointment back.

It’s always nice to wake up next someone with an impressive beard. As I’ve only had to tumble out of bed and into the living room to get to my desk (I’ve had a shower too, thanks) I feel that Tornike is offering me the virtual next best thing this morning. On the facial hair front he gets my 12 this year.

His song, however, does not. He sings the right words and the right tune in all the runs through, unlike his last rendition on the stage on Tuesday. He sings it very well too. There are some shots of him from floor-level looking up, which are neither effective nor flattering. It has the feel of “do something different” but rather as an afterthought. The projection of words onto him is shorter and more precise today, and it looks much better than Tuesday’s rehearsal.

Every year there’s a song or two about which there’s so little buzz. It’s there, they come, they rehearse, they go out in the semi-final. It feels like this is Georgia’s role to play this year. I do find it rather a shame for Tornike if this is what happens, indeed it’s gutting for any artist who doesn’t qualify, whilst we can sit here and blithely dismiss their efforts.

I don’t wish to simply dismiss this; Tornike is clearly an accomplished vocalist. There’s just nothing I can really see that can get this song through. The only route to qualification I can picture is the contrast in mood and his technical ability, though this feels like it needs a lot of jury backing rather than it coming from voters at home.

Jurors are asked, among other things, to judge a song on the basis of the quality of the performance on stage and the vocal capacity of the performer(s). On these criteria it’s difficult to find fault with Anxhela Peristeri. She delivers a killer vocal and commands this vast stage on which she performs alone. The points should come raining down upon her.

She deserves to be drenched in them. This is a class act. Yes, she’s singing Albanian power ballad variation #37195 but she is singing it very well indeed. She’s like a cross between Iveta Mukuchyan and Eleni Foureira, and delivering just as well as they did. Put her on the stage now and give her a rest until the final, because she’s getting there, and this could (or at least should) be Albania’s best result in some time.

There’s nothing to see here; at least nothing more or less than Tuesday’s already competent rehearsal, which surprised me at how effective it was. I’d not engaged with this song at all since winning the Festival da Canção but I’ve now looked at the lyrics and read a little more about it and it’s very odd indeed.

Inspired by the story of a sex worker met in Amsterdam, the band tell a story – for some reason known only to them from a first-person perspective – of a woman’s life soured by addiction and disappointment. I suppose we should be thankful they give her story a touch of optimism for a brighter future, but really, what the hell? It feels odd to me that they – men – should be singing from her perspective, or rather the one they choose to project onto her. I get that it’s probably well-intentioned, but my, is it clumsy – at best.

In another bizarre twist a Dutch newspaper has now launched a search to find the woman who inspired the song! Jeez, just leave the poor woman alone, will you?

Impressed as I am with the staging I remain firmly un so with the song, and even more so that I’ve done the digging. I hope the glow-up doesn’t pay off.

Victoria is another stage-ready artist. There’s very little to add here as she delivers perfect performances once more. If anything there seemed to be less emotional connection through the screen, but it’s a miserable Friday morning so I’ll cut her some slack. She only really need to crackle a couple of times at the right moments next week to get through, and she should make an easy job of it.

If we’re lining up the contenders there’s a fair bit of bleakness to cut through: Bulgaria, Switzerland and France all near the top of the betting. Yes, there are messages of hope in their vulnerability, and perhaps that will strike the right chord for our present world, but with so much stark emotion with the potential to cancel one another out, does this leave the door open for a joyful banger to creep through?