Two more songs joined the Turin list as one broadcaster found itself removed from the line-up. Time for the OnEurope weekend in review for week eight of the Eurovision on-season (just two more to go). 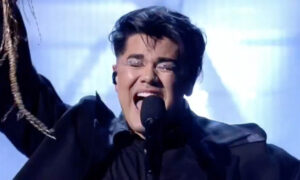 Eurovision tends to bring us either a song or a performance. The sweet spot happens when the two coincide. For Australia, Sheldon Riley is bringing a performance. His voice is stunning and detailed, his ability to hold the attention never in question. The weak spot is the song. A deeply personal and emotional story that I enjoyed while watching, but instantly forgot. I’ve heard it four times now and couldn’t sing a note. There’s a somewhat dated reality show winner’s journey vibe to an entry that could easily be a Sia album track. The Rasmus know what they’re doing. The performance at UMK was assured and solid. Perhaps even straying onto workmanlike with a danger of straying into unremarkable. The song is solid, however. It’s your average pop-rock number given a sound thrashing by a band who know how to stage any number. ‘Jezebel’ could very easily land mid table with the vital televoters which could scupper things.

Two more acts secured their places in the Melodifestivalen Grand Final. Two more go through to the final heat next week where they earn a second shot at the last remaining two spots. Check it out, if you want to see what happens when Sweden goes full-on Moldova. If you’re a late-starter, SVT has now made all the 2022 songs available online.

Read about the 4th Swedish Heat

The first of two Söngvakeppnin  heats aired last night, and two songs are secured places in the Grand Final. Five more songs next week with two more through and then RUV will almost certainly decide to hand an extra spot to one of the also-rans. All the songs are available to hear online.

Read all about the first Söngvakeppnin semi-final

16 August – The angels and demons side by side