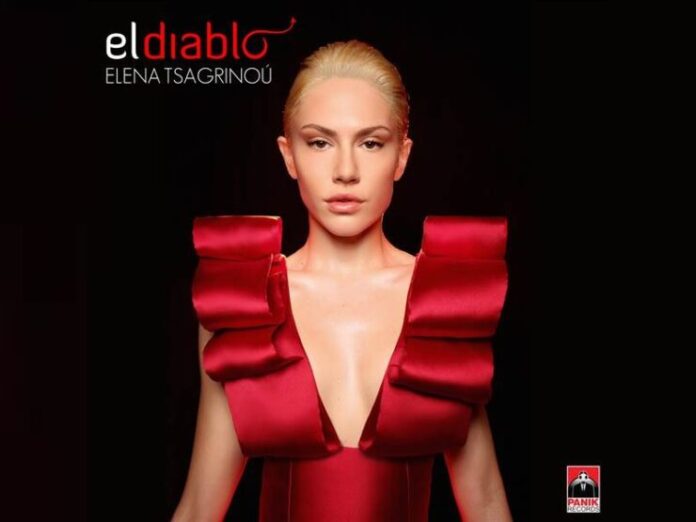 So, in a year when returning artistes are en vogue, recurring song themes are also in around Europe. The island of Aphrodite has gone with revisiting past glories insofar that this song will be the third in four years that all… sound… the… damn… same! You could say CYBC is stuck in a bit of a rut.

They are clearly under the mistaken impression that a woman in a skimpy dress cavorting around the place is the only genre that does well in this Contest. Whilst simultaneously forgetting they’ve consistently failed to win with that kind of thing.

This year’s rehash of ‘Fuego’ is the rather religious-hating ‘El Diablo’, sung by Elena Tsagrinou, and it’s been at the heart of one of Europe’s furious modern-day letter writing campaigns, with lots of people in Cyprus thinking it’s a bit too raunchy for the contest. (Here’s a clue, it isn’t).

The song is straight out of the Lady Gaga playbook – specifically sounding like any of La Gaga’s songs, and if you close your eyes, you can almost hear her singing. ‘El Diablo’ is a pretty standard banger-by-numbers that doesn’t stray too far from the getting loads of people televoting for it recipe that the last three songs have had, and which will yield limited success.

A heavy reliance on such an old formula could come back to bite Cyprus in a contest with a higher quality threshold than previous years. I expect Elena to have the gays dancing round the room, but the older folks (who make up a bulk of the voting audience) will have heard better songs.

Cyprus is the last on stage today – fashionably late

[…] I first heard this song, my immediate thought was to pan it like I had with Cyprus several days ago because on first listen, it's a clone of every 'Balkan banger' ever… just like 'El […]

it seems that since their success in 2018, Cyprus has found a formula which they think should work for them. Either copy their last year’s song in 2019 or make a song which is similar to something we heard before, without it being a plagiaat, which is what they have done this year.I am sure there is crowd for this song, but I was never Lady gaga fun, so it doesn’t work for me. And can I have a little bit originality in a song, please?

Cyprus has participated in the Eurovision Song Contest 38 times since making its debut in 1981. Cyprus’ first entry was the group Island, who finished sixth.

The country’s best result in the contest is a second-place finish with Eleni Foureira in 2018.

Between 2006 and 2013, Cyprus failed to qualify from the semi-final round six times, before withdrawing in 2014.

On 14 July 2014, CyBC officially confirmed Cyprus’ return to the contest for 2015, with the country then qualifying for the final every year since 2015.

Andromache will perform ‘Ela’ at the 2022 Eurovision Song Contest when she represents Cyprus.