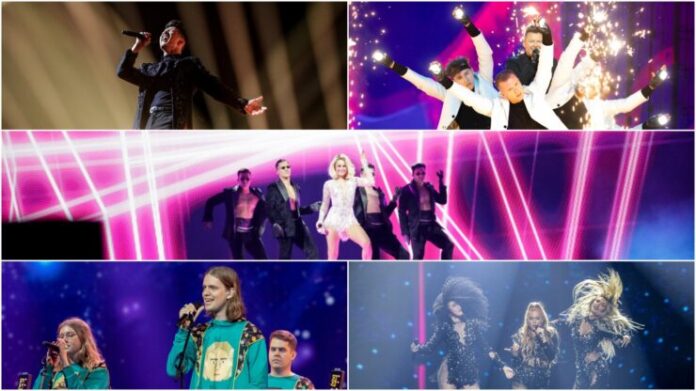 I didn’t see much of this I’m afraid, as I was in Benny’s presser, staring longingly into his eyes (on the screen) and adding reasons to my list of why he should let me have it.

What I did see looked good. Vincent’s still got the moderately blingy-edged jacket on so I’m just going to have to get over that, aren’t I?

It did feel a lot more powerful today. Amid all the power pop a power ballad might just do the trick – qualification-wise at least. The simple but very effective staging decisions have been well through through here; camera shots that enhance the visual impact and really great lighting do the ‘heavy lifting’ to enhance Vincent’s delivery. There’s enough here to qualify for sure, we just need to see how the votes scatter among a number of songs that are also in with a chance.

When we reflect back on Eurovision we remember those artists who achieved success. Not just winners, but memorable performances of songs that go on to be classics at a Eurovision disco for years to come. But there are also those who, despite pouring all their hearts and efforts into their songs crash and burn in the semi-finals, barely to be recalled.

Which reminds me, Poland’s up next, and even though he’s hyped his three minutes as the ride of our, and presumably his, life I think this on a one-way mystery tour to nowhere. All the winning songs in recent years have created a reason for you to vote for them: personal cultural histories, empowerment, triumph over adversity. There’s absolutely nothing in this kind of slickster braggadocio that connects in those kinds of ways or compels a viewer to back it.

Maybe the vast Polish diaspora can save this in the televote? The UK is voting in this semi-final; we’ve not quite scared everyone away with Brexit so there must be enough Polish people here to get on the blower, eh?

“I can’t explain it but there’s something going on” trills Natalia. Happen it might be, lady, but it ain’t prancing ice-creams, is it? Where are the spinning sorbets? The gyrating gelati? Is just one dancing dessert in all its knickerbocker glory too much to ask?

There’s a decent pop song in here, and it is quite nicely presented, still retaining a hint of camp, but I just can’t help rue the missed opportunities. In ditching all the sugary fun of the video Natalia’s proven herself to be the ultimate stick-of-rock-tease.

She serves a long last note that could swing in a late vote, and this is okay but I do feel like I’ve had my hand slapped in the supermarket and told I can’t have anything from the tempting racks at the tills.

On the basis of rehearsal one you could hand this to Daði now and send everyone home early to save a bit of money for their hotel bills next year in Husavik. There’s a level on which this should land with me as annoyingly as The Roop do. There’s the same kind of “I’m mad, me” nonsense about it, but Daði og Gagnamagnið seem to be more genuinely the kids at school who were never cool but have now found the joy in celebrating that. By placing his wife and baby at the heart of the songs there’s a pleasing home-grown domesticity about it all too.

Everything’s here to pick up where 2020 left off if they can reconnect with the vast audience they unexpectedly reached last year. I’d expect an increase in press activity next week as an aide memoire. There are a lot of people to remember them; Think About Things spent nine weeks in the UK chart alone. All the ingredients, baked into a slightly different but familiar recipe and we could see this succeed.

I heard the Serbian delegation was unhappy with how their first rehearsal went, but I’m not sure why. To me it looked great, and all but ready to go. Thankfully they don’t appear to have attempted major surgery on it though it looks like there’s a bit of cosmetic work to pick out lyrics and give a bit of oomph to the backdrop.

Hair is flying all over the place; there must be a few holes flicked into the ozone layer with the product that must be spraying off each flip of the neck.

I love this! It’s fun, and frivolous, and sung terrifically well. For a female-led pop song it’s a refreshing change to have three vocalists of equal impressive ability rather than a solo show flanked by dancers. Let’s get this into Saturday night for a delicious extra bop.

So that’s all the second rehearsals for today, the rest of semi final 2 go again tomorrow. Next up are the automatic finalists, and after the next six songs we’ll have seen all of Class of 2021’s contenders.