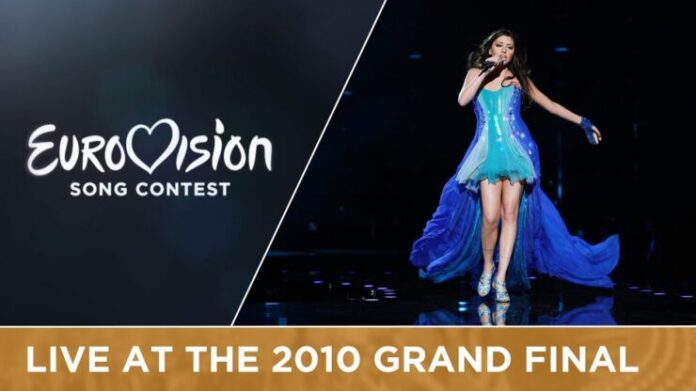 Do you ever wish for more ethnic songs in Eurovision? By ethnic I mean songs reflecting the traditional music of the country it represents. Or do you like music you’re familiar with?

Our friends in Azerbaijan have often used songwriters from places further north and west. That might take away from the wonderful Azerbaijani music there is out there, in favour of something more familiar to western European tastes. It could be both a good and a bad thing to do so. Back in 2010, birthday girl Səfurə Əlizadə/Safura Alizadeh did her stuff for Azerbaijan in Moscow, and her song was written by Scandinavians. She managed a second place in her semi-final, behind Turkey. And then she finished fifth in the Grand Final. But one thing that bothered us was what happened to one of her backing dancers. Four appeared in the first rehearsals, only three made the televised shows. Maybe she was ill.

Azerbaijan has participated in the Eurovision Song Contest 13 times since making its debut in 2008, after İctimai Televiziya (İTV) became an active member of the European Broadcasting Union (EBU).

İTV had broadcast the Eurovision Song Contest in previous years, purchasing broadcasting rights from the EBU. Azerbaijan was the last country in the Caucasus to debut in the contest and the first to win.

Azerbaijan won the contest in 2011, with Ell & Nikki and the song “Running Scared” setting the record for the lowest average score for a winning song under the 12 points voting system, with 5.26 points per country.

In 2018, Azerbaijan failed to advance from the semi-finals for the first time.

Voice of Azerbaijan winner Nadir Rustamli will perform ‘Fade to black’ for the country at Eurovision 2022.