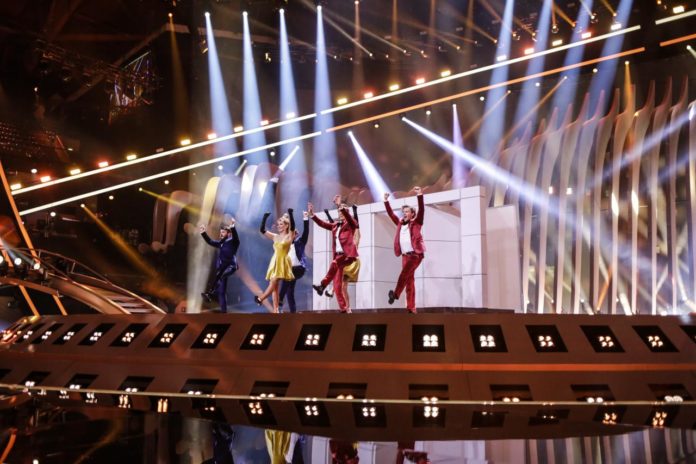 Today was the last ‘big day’ of rehearsals – tomorrow it’s a half day with the Big Five and Portugal. In a week’s time, we’ll be gearing up to live blog the Grand Final, meaning today must be Saturday. There’s no rest for the wicked, and no concept of ‘weekend’ here in ‘The Bubble’.

Vocally, however, it’s all sorts of wrong. They still know that Julia struggles with the vocals and, as such, the microphones are faded in and out to allow the female backing singer to take the harder notes – but even with that, it sounds off key and shrill.

There are many songs which go for the lowest common denominator and get it hideously wrong, aiming for the wrong demographic. DoReDos, however, appeal to people who like fun – remember fun? – something that this year’s contest seems to lack.

The song itself is not that bad, it’s a light country rock song and has all the decent requisite parts that anyone who listens to this genre expects. It’s the staging that’s still the problem.

Once she has lost the viewers, it doesn’t matter what she does (and, for the record she’s performing a very average pop song in a frock that can be described as “ill-advised” because, let’s be honest, it’s not flattering).

Iriao have not missed a beat during any rehearsals – they look down the camera and just sing their hymnal. The only bit of “oomph” is the fire curtain at the end, but it just accentuates the kind of song that this is.

There seems to have been a lot of tightening up of camera angles and Lukas looks somewhat less worried on stage (and more professional).

Nothing much has changed; the screens are there, the fire and the lasers are reminiscent of Jean-Michelle Jarre (or the 1980’s) but that’s no bad thing.

The performance hasn’t changed that much, although AWS have polished what needed to change from the first performance. It’s visually arresting – which is clearly what they are going for – and it still includes crowd-surfing, which didn’t go down well at their first rehearsal.

I appreciate it’s supposed to convey someone who feels weak and vulnerable, but the overall impression that this song is missing something.

Lots of neon tubes, a dull soul shuffle, hairy arms, shiny jacket, tight trousers and not much else.

Come next Thursday, I feel that the burgers of Europe will be so mentally drained by the gallons of batshit on offer, that by the time Captain Blue from Captain Scarlett comes on screen, their bladders will explode and Europe will enjoy a collective toilet break.

I’m struggling to see who on earth would vote for this next Thursday, because it just comes over as messy. 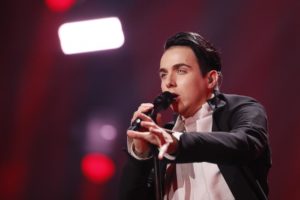 It’s more show than song with the massive piano, the fire? and Melovin mincing around the stage.